Accounting tips, industry developments or simply news from our offices.

The $20k Instant Asset Write-Off (and we’re in the press again!) 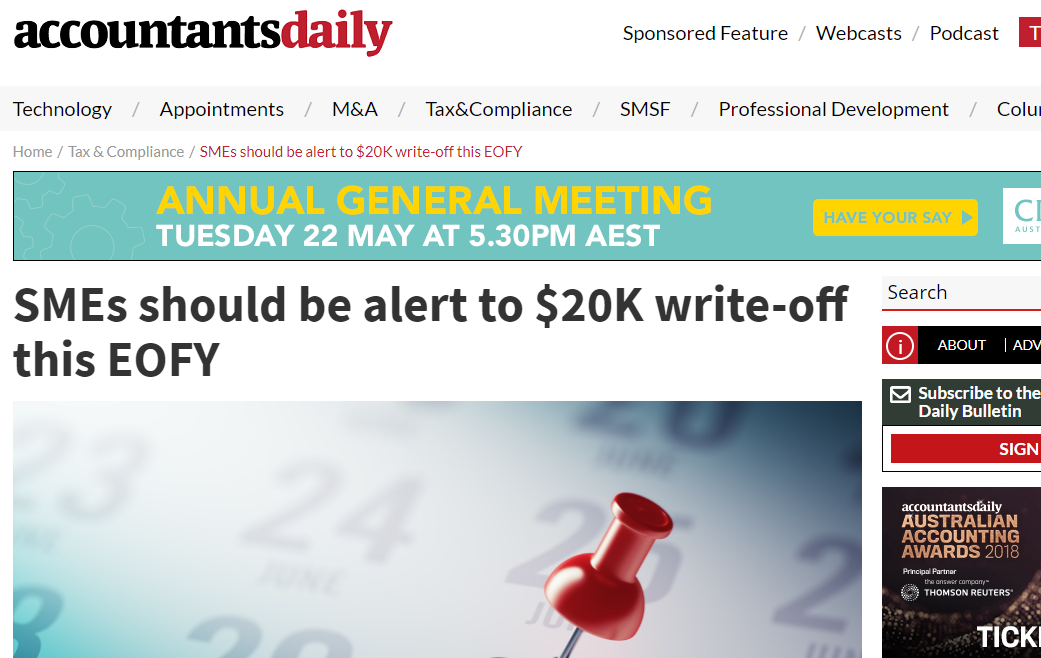 The $20,000 Instant Asset Write-Off is probably the most relevant and widely-used tax benefit to small business, and it may be a term that you’ve heard lately in the latest Budget.  But what does it mean for the average small business?  Accountants Daily interviewed us to find out.

If you have a business with annual turnover of less than $10 million, then you’re entitled to write-off purchases of plant and equipment (as long as they cost less than $20,000 each) in one go, instead of depreciating it over many years. This is the most widely-used and is the most relevant tax concession to small businesses, and it was meant to come to an end on 30 June 2018.

But the 2018 Federal Budget gave it a new lease of life, and it’s been extended until 30 June 2019. So what is it, and what does it mean for the average small business?

The instant asset write off is tailor-made for things which you use until it’s all falling apart and then throw away. Like say computers, printers, fitout assets for your shop, or factory equipment for manufacturing. Those things are usually depreciated over a few years, and so you claim a tax deduction for their cost over your next few years’ tax returns.  But the instant asset write off means that you can claim the tax deduction in this year’s tax return in one go; which means a nice healthy reduction in your tax bill. So if you were going to buy some new stuff in the next few months anyway, you might consider buying them before 30 June instead, and your tax return might be a pleasant surprise.

But what about things that you might sell later on, like say a vehicle? You can still claim the write off if it’s under $20,000 but there is a downside when you sell. Just as you get a nice big tax deduction when you buy…when you sell it later the reverse applies and the selling price of the vehicle is added to your tax return as pure profit. This doesn’t mean that you shouldn’t do it; but you should be prepared that the nice tax benefit you get is partially given back later.

This of course doesn’t affect things that you’re never likely to sell. So if you want to drop into JB Hifi and go crazy…hey, you’ve worked hard, and you deserve new things. But go nuts at a car dealership?  Not so much.

Click the link below to go to the article: